A $2.1B Apples to Apples Contribution Analysis in New York State

Finding the Economic Footprint of an Industry

Often times a region’s identity is deeply tied to significant industries in that area. Industry associations and local governments are often particularly interested in being able to demonstrate the overall economic contribution that an industry provides in their local economy. Contribution analysis is a modeling method used to estimate the value of a sector or group of sectors in a region at their current levels of production. The purpose of these studies is to determine what other businesses in the local economy are being supported by a given industry. While jobs created or dollars generated may be more easily digestible numbers, contribution analysis provides a more complete picture of an industry’s overall economic effects. These analyses have been used consistently by industries including Florida citrus, Minnesota bicycles, and Asheville, NC breweries. In this piece, you will see how one agricultural association approached their study and how their framework can apply to anyone seeking their industry’s economic contribution. Researchers from Cornell University sought to study the relationship between the agricultural industries within their local economy. Their specific focus was “less on the actual levels of impact, but rather on the process and what practitioners need to consider to appropriately estimate economic contributions, avoid double counting, and interpret the results.” The study was completed in collaboration with the Cornell Cooperative Extension (CCE). The Cornell Cooperative Extension is a program which focuses on “agriculture, food system, and rural-based businesses and associations. The program is a resource for people desiring to form a cooperative or learn more about the unique nature of a cooperative-structured business.” The research was supported by a grant from the New York Apple Association (NYAA), a commodity association dedicated to researching and promoting the apple industry in New York state. Getting the Right Data

The final report states, “When conducting an economic impact or contribution analysis in IMPLAN, it is important to consider when the existing industry parameters that represent its spending activities are sufficient for analysis and when those parameters should be updated through supplemental data collection.” The spending patterns present were based on national fruit farming averages. Researchers were aware that there are significant differences in general spending patterns between large fruit farming operations in Washington state (for example) and small apple farms in New York state.

In order to account for this issue, the team sought primary data to ensure the most accurate, representative spending patterns. Surveys were identified as an efficient method of data collection. The survey was developed to match business categories with the IMPLAN sectors and distributed both online (via Qualtrics) and in written formats. NYAA assisted in administering the survey by contacting members via electronic channels and in-person requests. Despite reminders and a significant push by NYAA, survey response rates were incredibly low. Only 25 of 600 commercial apple growers responded at all, and of the 25, only 4 responses were sufficient for analysis. Low response rate was attributed to insignificant participation incentive and poorly-timed distribution (early fall, “Harvest Time”).

With the survey producing insufficient results and several months lost, the research team was faced with the difficulty of finding a new primary data source. This search led to the Lake Ontario Fruit Team (LOFT). LOFT, a partnership between Cornell University and the CCE Associations in five NY counties (Wayne, Orleans, Niagara, Monroe, and Oswego counties), strives to maintain profitability and facilitate improvement of fruit farming in their area through applied research. The Cornell researchers used the data collected by LOFT for their own Fruit Farm Business Summary and IMPLAN’s local purchase percentages (LPP) to create a representative apple farming spending portrait. The study consisted of a multi-industry economic contribution analysis. Multiple individual contribution analyses allowed for detailed accounting of specific indirect and induced effects related to each industry. This ensured that the determination could be made where outputs in one industry represent inputs to another industry. Illustrating this, ensured that double-counting did not happen.

The “apple industry” in New York state was not limited to a single sector, but was rather the aggregation of 7 sectors. Due to the industry aggregation, each sector needed consideration in the modeling process and additional data was required. These sectors were: 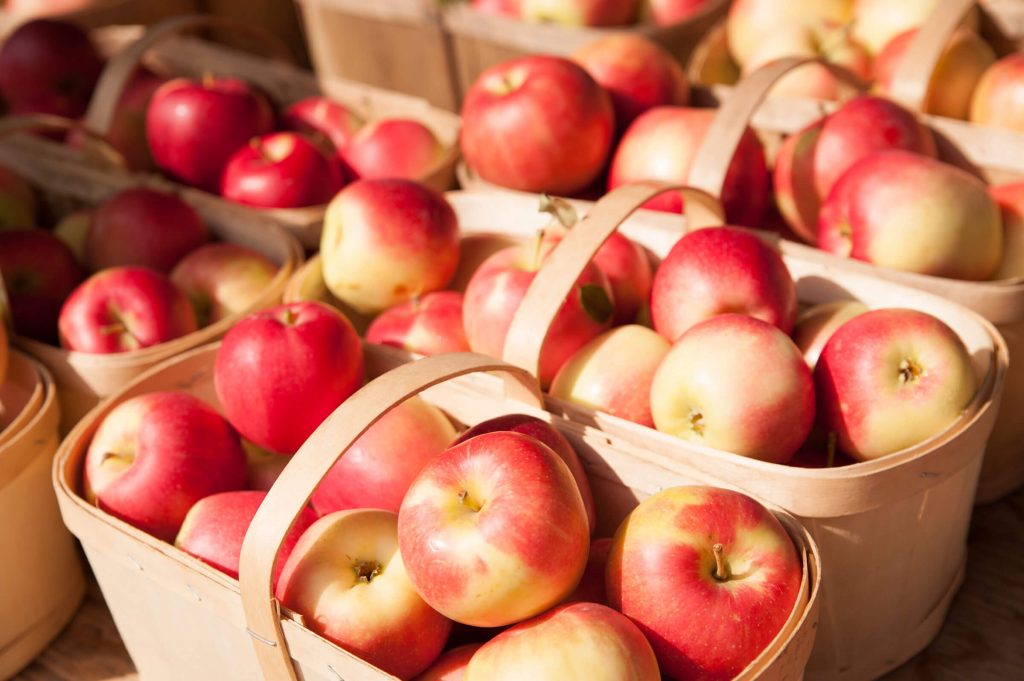 *The contribution multiplier is calculated as the total effect divided by the direct effect.

When the greater apple industry is taken into consideration, the overall economic contribution on New York expands exponentially. The aforementioned 7 sectors combine to contribute $2.1 billion in output, $587.9 million in labor income, and support 11,872 jobs. For every dollar spent within the apple industry, $0.58 of output are generated, 0.85 jobs are supported, and $0.48 in labor income is contributed in non-apple industry businesses.

The New York Apple Association approached this study seeking to quantify their industry’s output. Instead, they were able to determine their complete contribution to the local economy, not merely within their industry. In doing so, Cornell researchers and NYAA demonstrated a best practice for completing an industry contribution analysis: by supplying additional primary data and performing multi-industry economic analyses, researchers ensured results were accurate and provided context beyond just a multiplier.

The research framework was not merely a success for the researchers, NYAA received a very detailed report that provided the ability to distill significant economic contributors within the industry as well. The contribution numbers also received a great deal of attention from news outlets and other external sources. The results caught the eye of local legislators, who jumped at the opportunity to partner with and promote the local apple industry. Ultimately, the study benefited all interested parties. In doing a thorough complete study, the team from Cornell demonstrated creativity in finding the right data, and NYAA exhibited their far-reaching economic contribution and drew rave responses from their local business and political community.

Crenshaw Mixed-Use Project: How One City Worked with Investors and Developers...

How the Tennessee Hospital Association Quantified the Economic Impact of Healthcare...
Scroll to top
We use cookies on our website to give you the most relevant experience. By clicking “Accept”, you consent to the use of cookies and agree to abide by our website terms of service.
View Privacy PolicyACCEPT
Manage consent