The Hawthorne Realty Group together with the City of Hawthorne in southern California explored the general economic impacts and municipal fiscal impacts attributable to a project’s construction and annual operation on a specific site that the city sought to develop. Hawthorne Realty Group commissioned HR&A Advisors, Inc. to calculate the impacts based on a mixed-use development that would include 274 market rate apartments (studios, 1-BR and 2-BR units), 2,600 square feet of ground floor restaurant use, and a 177,000-square foot parking garage.

Their analysis considered both construction and operations phases. Rather than group all construction activities together, the analysts examined construction budgets based on construction category to more accurately reflect the potential output and employment impacts which can vary from project to project depending on the skills, project scope, and materials needed.

HR&A also found that the project would have a lasting impact which would benefit the city. According to their report,

“The Project will generate about $413,000 in annual revenues, expressed in nominal dollars, to the City’s General Fund once the Project achieves stabilized operation. After accounting for the existing property tax revenue of the existing site, the net municipal revenue impact to the City’s General Fund in the first stabilized year will be  approximately $405,000. Over the 2017-2040 analysis period (construction through 20 years of stabilized operation), the net municipal revenue impact will be approximately $10.8 million in nominal dollars, or about $4.5 million in constant 2017 dollars.”

The project had been met with mixed feelings by residents and city officials. But because the economic impact and other analyses were so detailed, project and real estate managers could quickly adapt the overall project plan to meet local expectations and needs for how their city through the project would grow.

After much deliberation over the scale and scope of the proposed development, the city eventually approved a plan devised by The Dinerstein Companies to execute the city’s vision for a site with incredible potential. Once completed, the Millenium Hawthorne will offer 230 residential units and 3,100 square feet of commercial space, and crucially, a dedicated parking garage which satiated much concern over the parking problems that might follow the project. 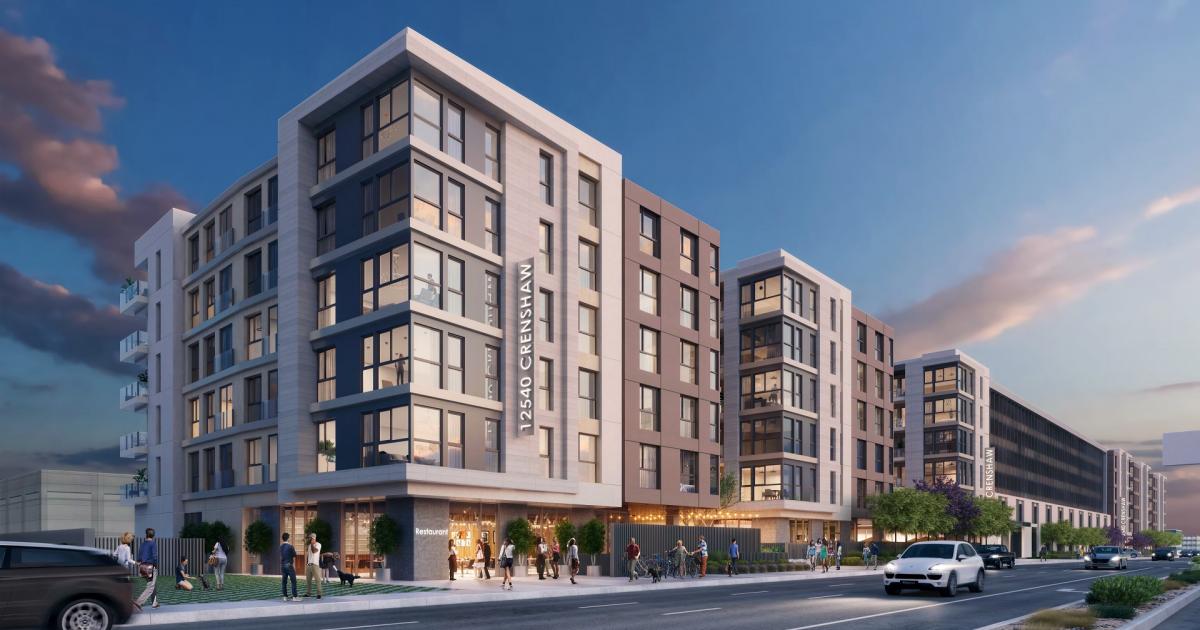 Architecture firm Steinberg Hart has unveiled renderings for a mixed-use development planned near SpaceX headquarters and the Hawthorne Municipal Airport.The 2.53-acre project site, located along Crenshaw Boulevard between Jack Northrop Avenue and El Segundo Boulevard, calls for the construction of 230 residential units with approximately 3,100 square feet of ground-floor commercial space and a dedicated…

Much was in flux at the time that HR&A compiled their analysis. The city was also looking into best zoning options for the land and had initiated an environmental impact report as well as other inquiries to determine the best possible use of the proposed development site. Knowing this, HR&A framed its study as a net analysis, reporting both the gross economic impact of the project and factoring increased or decreased economic activity as a result of the project’s construction and operations.

For example, while the environmental impact report that the city commissioned concluded that there would be no significant impact to city services (such as the need for more public safety personnel), the report did find that existing tenants of the development site would either relocate or take advantage of the development once completed. Since their economic contribution was preexisting, it didn’t count towards HR&A’s final impact numbers as part of their net analysis.

Framing new mixed-use development economic impacts as net analyses pays deference to the existing fabric of a site’s community while also highlighting the potential as an economic driver for the area. A $2.1B Apples to Apples Contribution Analysis in New York State
Scroll to top
We use cookies on our website to give you the most relevant experience. By clicking “Accept”, you consent to the use of cookies and agree to abide by our website terms of service.
View Privacy PolicyACCEPT
Manage consent